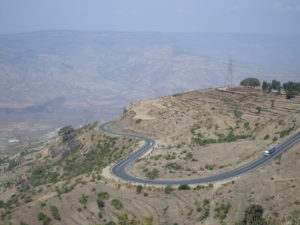 Debre Libanos:  is a monastery in Ethiopia, lying northwest of Addis Ababa at 105 km in the Oromia Region. The church is founded in the thirteenth century by Saint Tekle Haymanot.

Along the side of the church, you cross a river and proceed on foot up a hill for about 15 minutes. According to legend, the Ethiopian Saint, Tekle Haimanot, prayed there. The legend says that he stood on one foot for so long that the other foot fell off.  Sick people queue to receive holy water (which is believed to be a sign of the saint’s prayer).

Portuguese bridge: It was built in the 16th century by Portuguese. Nearby the bridge, you will see Galada Baboons, which are endemic in Ethiopia