Axum was the ancient political and religious capital of Ethiopia. As legend says Queen Sheba, who reigned around 1000 B.C. had Axum as her royal capital. Axum is also known to be the home of the Ark of the Covenant. The area of Axum is a home to steles, all decorated in the same style, with doors and windows and astral imagery at the top.

Lalibela in Ethiopia is one of the sacred sites in Ethiopia where it consists of the eleven rock-hewn churches, each carved entirely out of a single block of granite.

To reach the entrance of each church, people have to descend through a steep channel cut from the rock, or pass through a tunnel from a neighboring church. The rock-hewn churches of Lalibela are located in a remote and mountainous area of northern Ethiopia.

Gonder was founded by King Fasiledes in 1636; it was the capital of Ethiopia for nearly 200 years. Gondar is known for its seventeenth century Royal Enclosure including: The palace of Emperor Fasil, which is built roughly hewn brown basalt stones held together with lime mortar. The architecture has Indian, Portuguese and Axumite influences; the library of emperor Yohnes I (1667 – 1682) a nearby chancellery; the saddle shaped castle of emperor Iyasu I (1682-1706); the large hall or house of song of emperor Dadwit III (1716-1721), in which many ceremonies took place informer days; the long V-shaped reception and banqueting hall of Bakaffa(1722-1730), and the two storied palace of the latter’s redoubtable consort, empress Mentewab.

The Church of Debre Birhan Selassie “Trinity Mountain of Light” was built by Emperor Eyasu. The church is famous for the mural paintings on the ceiling.

Bahir Dar is the capital of the Amhara Region situated at the shores of Lake Tana.

Bahir Dar is a base to explore the surrounding areas like Blue Nile Falls, Lake Tana and the churches and monasteries on Lake Tana.

For your travel needs in Ethiopia, please contact us: 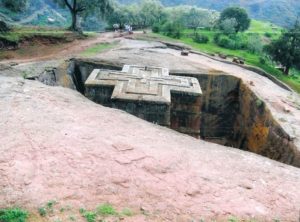 Saint George Church (Bete Giyorgis) is one of the eleven rock-hewn monolithic churches in Lalibela, Ethiopia. 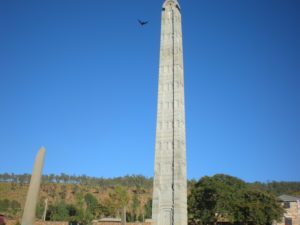 Day 2: Morning fly to Bahir Dar, on arrival boat trip on Lake Tana to visit the Island Monasteries. In the afternoon, drive to the Blue Nile Falls

Day 3: Drive to Gondar; visit the city with its interesting 17th century castles and churches. Overnight in hotel

Day 4: Flight to Lalibela, center of Christian religion, considered with its 11 rock hewn churches, the Jerusalem of Ethiopia. Visit of the churches. Overnight in a hotel

Day 5: Flight to Axum, Archeological, cultural and religious center of Ethiopia, after transfer to hotel we will visit the city, the first capital of Ethiopia.

Day 6: Morning fly back to Addis Ababa and afternoon, departure back home.

For your travel needs in Ethiopia, please contact us: